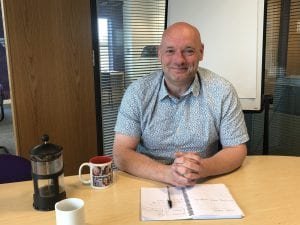 In the first of a series of articles, ‘In Conversation’, with academy trust CEOs, Michael Pain (Founder of Forum Strategy and author of Being The CEO) speaks with Wayne Norrie, CEO of Greenwood Academies Trust, about how the trust has confronted its failures, created the conditions for sustainable improvement, and is now opening up a world of opportunity for its pupils and staff through broader partnerships.

In December 2016, Ofsted published its ‘batched inspection’ report on Greenwood Dale Academies Trust. The inspectorate was damningly unrestrained in its criticism. The report, which followed the inspection of six of its 31 schools within a matter of days, stated that the trust had “let down pupils over a number of years”. Half of those schools inspected required special measures. Greenwood Dale – a trust that emerged from a model that had worked so well in one individual school – had failed to translate that success as an academy trust. A familiar story.