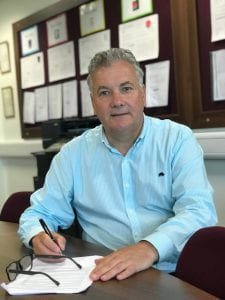 In the third of a series of articles, ‘In Conversation’, with academy trust CEOs, Michael Pain (Founder of Forum Strategy and author of Being The CEO) speaks with Andy Brown, CEO of Ad Astra Academy Trust, about the importance of operational leadership, ‘letting go’, and finding the balance between consistency and autonomy across trusts.

Andy Brown’s career as a school leader has closely reflected the changing education landscape. Since becoming a headteacher in 1996, he went on to become a National Leader of Education – supporting numerous primary schools across the North East of England. Andy’s commitment to building a culture of collaboration and school to school support was reflected in his being awarded an OBE in 2016. Like many of this generation of successful school leaders, Andy has seen his role evolve into one of CEO, seeing a collaboration of schools move to academy trust status as the Ad Astra Academy Trust. So, how has such a well-regarded and successful leader found the transition to the CEO role, and what tips can he share with those who are following in his footsteps?

END_OF_DOCUMENT_TOKEN_TO_BE_REPLACED

Welcome to Forum Strategy’s Being The CEO report for 2022, our third such report over consecutive years. Each year has presented the opportunity to consider how the views and experiences of CEOs (using a sample of our national CEO network membership) are changing over...